The media platform will donate ad space in cities across the U.S. to help raise climate change awareness 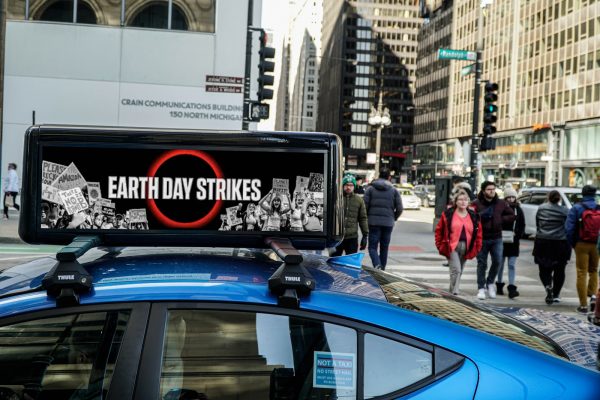 San Francisco, CALIF. (March 10, 2020) Americans across the country will begin seeing invitations to participate in the upcoming Earth Day Climate Strikes as part of a nationwide public service ad campaign kicking off today. The ads, mounted on top of taxis and rideshare drivers’ vehicles, are being provided by Firefly to the U.S. Youth Climate Strike Coalition at no cost. The ads, which will reach eight of the nation’s top media markets when the strike launches on April 22nd, will reach a potential total of more than 19.4 million people across the country.

“The message on display for millions of Americans is to Strike With Us. Strike from work, school and business as usual so we can have a future where we are spared from fires and floods. We’re grateful to Firefly for helping us bring this message into the heart of American cities,” said Katie Eder, Executive Director of Future Coalition.

The ads will be on display in cities expected to draw major turnouts for the Earth Day Strikes: San Francisco, Los Angeles, Dallas, Chicago, New York, Miami, Austin, and Las Vegas. The visual depicts people striking with warning signs like, “There Is No Planet B.”

Firefly is supporting the U.S. Youth Climate Strike Coalition’s efforts to heighten national awareness around the urgency of addressing climate change as part of its community-first approach. The street-level digital media network dedicates 10 percent of its inventory to non-commercial entities, such as local governments, community organizations, and AMBER Alert, with the promise to amplify their messages.

“No one, regardless of age, is exempt from the negative impacts of global climate change,, which demands urgent action,” said Gregory Stock, Director of Public Affairs and Partnerships for Firefly. “Today, we are proud to stand alongside the Youth Climate Strike Coalition to help spread the word in the communities we operate in.”

There are multiple days of direct action planned for the Earth Day Climate Strikes starting on April 22 with a mass mobilization. The upcoming strikes, which mark the 50th anniversary of Earth Day, builds on the momentum of the largest youth-led climate mobilization on September 20, 2019, when 650,000 people in more than 1,300 cities across the U.S. participated in strikes to call on elected officials to rise up and address the climate crisis.

The Youth Climate Strike Coalition is composed of the following organizations:

Divest Ed is a training and strategy hub working to resource, vitalize, and broaden the fossil fuel divestment movement one campus campaign at a time.

Earth Guardians is an organization that empowers young environmental and social leaders through education, tools, and resources, in order to become effective leaders in their communities.

Extinction Rebellion Youth is led by a community of young people within Extinction Rebellion, a network focused on coordinating national civil disobedience actions to draw attention to and persuade governments to act on the climate and ecological emergency.

Future Coalition is a national network and community for youth-led organizations and youth leaders. Future Coalition works collaboratively to provide young people with the resources, tools, and support they need to create the change they want to see in their communities and in this country.

The International Indigenous Youth Council is an organization that seeks to organize youth through education, spiritual practices, and civic engagement to create positive change in our communities.

Sunrise Movement is a youth-led movement of young people committed to stopping the climate crisis. Sunrise Movement is currently leading actions around a Green New Deal, including by planning hundreds of launch parties across the country in January 2020.

Zero Hour is an intersectional movement around climate change. In 2018, Zero Hour organized the first official Youth Climate March in 25 cities around the world and laid the groundwork for the climate strike movement.